GABA for Sleep: Is It an Effective Sleep Aid Supplement?

Many people rely on a GABA supplement for sleep, but does it truly work? Taking GABA for sleep isn’t as straightforward as you might think. Sleep is a complicated physiological process, although it’s as natural as it gets regarding bodily functions. Sleep-related problems affect a large portion of the general population. Recent studies show that about 30 to 35 percent of the adult population suffers from insomnia.

Numerous studies indicate that prolonged wakefulness may have multiple negative consequences. These include impairment of cognitive and psychomotor performance, a lowering of immune competence and even emotional instability and psychotic symptoms. Several of these side effects disappear when using brain enhancement supplements. However, quality sleep will always be a vital component to overall mental and physical health. Regular, uninterrupted sleep is the best natural solution to enhance your focus, improve energy levels, and boost memory retention without additional supplements.

The process of sleep involves active inhibition of many functions of the organism, including senses and voluntary muscles. Insomnia, usually associated with anxiety and depression, commonly reflects a lack of this central inhibitory process in the nervous system. Almost all medications used in treating insomnia affect neurotransmitters that take part in the inhibitory processes of the body.

In the early 1900s, the first generation of powerful sleeping pills, Barbiturates, were introduced. These prescription medications have fallen out of favor due to their toxicity. The rapid development of tolerance, inducing both physical and psychological drug dependence, was also a major cause for concern.

Sleep studies have recently determined that GABA levels are up to 30% lower in people suffering from insomnia. Further studies revealed that GABA levels are also lower in patients with depression or mood disorders. There is an apparent link between mood disorders and insomnia. If a supplement could increase the level of GABA in the brain, it could singlehandedly treat both insomnia and depression, effectively. These were groundbreaking discoveries, paving the way for many new sleep aids using GABA as the heavy lifter in the formula. Since this discovery, some users even take GABA to counteract the extended wakefulness effects of prescription smart drugs like Adderall or Modafinil.

GABA (gamma-Aminobutyric acid) is a naturally occurring, self-regulating, chemical compound produced in the brain. The primary purpose of GABA is to reduce the excitability of neurons. Thus, it is considered an inhibitory neurotransmitter that partakes in suppressive activities. Most notably, GABA works to suppress excitatory neurotransmitters norepinephrine and glutamate (GABA’s metabolic precursor). GABA is intimately involved with the parasympathetic nervous system (PNS). The PNS (a part of the autonomic nervous system) is primarily responsible for energy conservation at rest.

GABA’s calming effect isn’t just mental, but it’s physical as well. Since GABA plays a significant role in muscle tone regulation, it can reduce muscle spasms helping to create a state of physical relaxation. Often, the best supplements for mood enhancement act in the same manner. Reducing stress, anxiety, increasing serotonin and relaxing the user all work to create a more positive mood in the individual.

Past studies have confirmed that GABA is the primary inhibitory neurotransmitter in the central nervous system (CNS). The levels of this important neurotransmitter are affected by poor diet, illness, or exposure to environmental toxins. Studies show that GABA levels also decline with age. An insufficient amount in the body may lead to anxiety, irritability and sleep disorders like insomnia. GABA levels are also lower in people with ADHD. For this reason, GABA serves a dual purpose as a natural Adderall alternative.

Ambien, Rozerem, Lunesta and other popular prescription sleeping pills are merely agonists. They work to potentiate GABA by binding to GABA-A receptors, but they don’t contain any of the neurotransmitter itself. These sleep aids tend to work on the GABA or melatonin receptors in the brain. Because of this, the possibility of supplementing GABA for sleep improvement has become a favorite topic of many researchers.

Does GABA make you sleepy?

Indirectly, yes. Increased levels of GABA make you sleepy. Too much brain activity often leads to insomnia or at the very least, restlessness. GABA (gamma-Aminobutyric acid) works to counterbalance glutamate, the primary excitatory neurotransmitter in the brain. When there is not enough GABA in the brain, it is unable to shut down and induce an altered state of consciousness, otherwise known as sleep. Instead, your brain remains active, and excitatory neurons continue to fire preventing you from sleeping.

Several recent studies on the brain during sleep cycles indicate GABA levels are higher in individuals during deep sleep. When less GABA is present in the brain, disrupted sleep is inevitable. The issue of light sleep is very common amongst insomniacs.

When someone asks, “does GABA help you sleep,” or, “how much GABA should I take,” often they’re referring to a pill or supplement of some kind. Many studies confirm the connection between GABA and sleep disorders, but the effectiveness of GABA supplements is up for debate. Some studies indicate that GABA administered orally is unable to pass through the blood-brain barrier in amounts that can cause considerable change. This theory is unpopular among many experts, but it exists nonetheless.

On the other hand, a recent study at the UCLA School of Medicine revealed substantially different results. Surveyed patients with sleep disorders consumed either a placebo or a supplement containing GABA. There was virtually no change in the placebo group. However, the group who received the GABA supplement showed improvement in both the time to fall asleep and sleep duration. The improved sleep quality enhanced the user’s sense of well-being, cured their brain fog and mental fatigue, and boosted energy levels.

Studies also indicate that drugs whose primary function is to increase the amount of GABA directly appear to be safer. Drugs that bind to GABA receptors (agonists) are known to have more side effects when taken long-term for treating chronic insomnia.

Some physicians believe that taking a natural GABA supplement can raise the amount of the neurotransmitter in people with a GABA deficiency in their brain. In traditional medicine, GABA supplements are usually prescribed to insomniacs as an increasing number of individuals who take the supplements report that GABA does help with sleep. Additionally, improved sleep quality and serotonin synthesis mean GABA can also increase focus and concentration in those who are GABA deficient.

GABA’s regulation system within the body is what makes it unique. It has a self-inhibition system where it’s able to block its transport in situations where the GABA dosage for sleep exceeds utility. In other words, abnormally high doses of GABA (systemic excess) are unlikely to cause depression or excessive sleepiness due to self-regulation.

Studies have shown that GABA’s self-inhibition system cannot block all transport of GABA across the blood-brain barrier. In certain cases, GABA inhibition has been recorded as high as 80% when super loading the supplement. This inhibition rate means that as much as 20% passes through the blood-brain barrier and becomes usable at extremely high doses. An additional study has confirmed that high levels of nitric oxide (NO) can increase blood-brain barrier permeability to peripheral GABA. The other phenomenon to note is that GABA’s uptake into the brain is lower at higher doses. On the reverse, GABA’s uptake is greater at lower doses.

GABA is non-toxic and is shown to be safe when taken at the proper dosage. The recommended dose of a GABA supplement for sleep is 250mg to 500mg just before sleeping. For insomniacs, high doses are often used to ensure that some of the inhibitory neurotransmitters reach the brain. Doses between 500mg and 1000mg are typical for treating insomnia naturally. The GABA dosage for sleep in regular users should be much less. It is not advisable to have a daily dosage over 1,200mg. GABA supplements have no identified adverse drug interactions. It is also recommended to begin at a lower dosage when taking a GABA supplement for the first time and slowly increase intake as needed.

Using GABA for sleep improvement is a relatively new trend, but a promising one at that. Possible side effects of GABA, although very rare, include accelerated heart rate and difficulty breathing. Anxiety may be another side effect of GABA supplements when taken at higher doses. Tingling or itching sensations may also appear with excessive dosing. If you experience any adverse side effects while taking GABA, they should dissipate at lower doses.

Are there any other sleeping pills that work?

Phenibut is a synthetic derivative of GABA, known for its ability to penetrate the blood-brain barrier. Because of this, Phenibut has become a popular sleep aid. However, it’s possible to develop a tolerance to this drug, so use it with caution. Dependency issues with synthetic sleep aids will likely lead to more long-term problems.

If you’re looking for natural sleep remedies, L-Theanine is a precursor to GABA and has been touted for its ability to help with stress, anxiety, and depression. Many people use L-Theanine for social anxiety, or as a relaxant, giving them an opportunity to get a better night’s sleep. Tryptophan and 5-HTP are also good options for getting more natural sleep without prescription medication. It is not recommended to take GABA supplements while taking medication for depression, during pregnancy and while nursing. GABA should only be given to children if prescribed by a doctor. What do you think about using a GABA sleep aid? Tell us about your experience below! 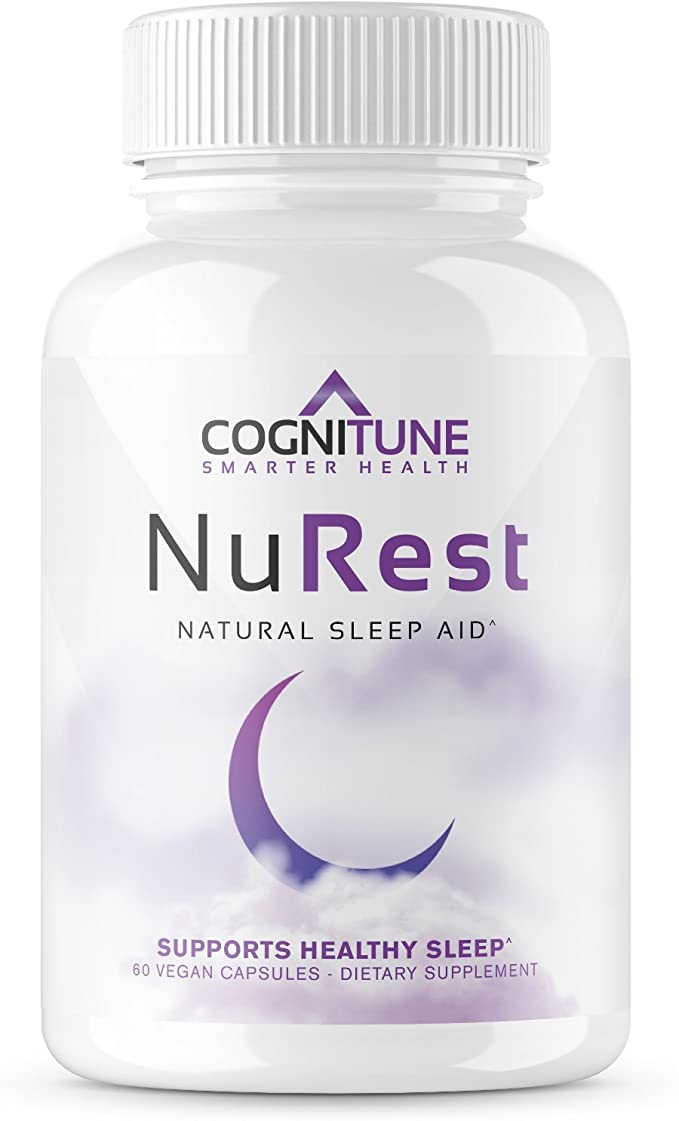