Has your heady been feeling kind of cloudy or fuzzy lately? Have you been especially unfocused or just generally mentally fatigued?

If so, you’re not alone. These symptoms are typical of a phenomenon called brain fog, and many people have experienced it at some point in their lives. Brain fog isn’t considered an official medical diagnosis or even a scientific term, but that doesn’t make it any less real when you just can’t seem to think clearly.

Fortunately, there are some supplements out there that can help you fight the symptoms of brain fog. So, if you are looking to feel clear-headed again, then keep reading to find out more about the best supplements to help with brain fog.

What Is Brain Fog?

Since it is not a medical or scientific term, there isn’t really an official definition for brain fog. Generally, though, brain fog describes a sense of cognitive dysfunction or a “cloudy-headed” feeling. It may be characterized by symptoms such as:

While it is common for people to occasionally experience brain fog throughout their lives, it can get to the point where it is chronic and interferes with daily activities. This can be especially true when brain fog is a result of other health issues.

There are numerous reasons why one may be experiencing brain fog and its associated symptoms.

Stress can have many different negative effects on the body. Chronic stress especially can lead to a weakened immune system, increased blood pressure, depression, and mental fatigue. If your brain is constantly stressing out about something, it can become tired, leading to difficulties concentrating, reasoning, and thinking.

If you have difficulties getting to sleep, staying asleep, and/or waking up, you are probably not getting enough rest at night. Everyone has probably experienced a groggy feeling getting up in the morning after a poor night’s sleep, but if you’re experiencing this every day, you may have what feels like chronic brain fog.

Brain fog may be a side effect of certain medications, including those relating to cancer treatments. In cancer patients, it is commonly referred to as “chemo brain.”

A change in the levels of certain hormones in your system may cause brain fog. For example, women commonly experience increased estrogen levels and progesterone during pregnancy and reduced estrogen levels during menopause. Both increases and decreases may affect memory and other types of cognitive impairment.

The types of conditions that are most often associated with symptoms of brain fog include those that are related to fatigue, changes in blood glucose levels, and inflammation. Brain fog has also been linked to many other conditions, including:

Food sensitivities or allergies may lead to brain fog and deficiencies in certain nutrients such as vitamin B-12. Removing or incorporating particular foods or nutrients into your diet may help to alleviate symptoms.

Some Thoughts on the Causes of Brain Fog

When it comes to the different causes of brain fog, the one that is probably easiest to control would be your diet. However, it can be difficult to just suddenly stop all sources of stress, sleep difficulties, prescription medications, hormonal imbalance, and health conditions.

Therefore, regardless of its cause, incorporating certain nutrients into your diet may often be your best bet in reducing symptoms of brain fog. While you may not have any deficiencies, in particular, adding in some supplements that have been associated with improving concentration, memory, and executive function may give your brain the boost it needs to help lift the fog.

The Best Supplements to Help with Brain Fog

Here are some of the best brain supplement options you can use to help combat brain fog.

Medium-chain triglyceride oil, or MCT oil, comes from coconut palm trees. It produces ketones, which the brain can use as an alternative energy source when glucose isn’t available. This makes it especially good brain food for those on a ketogenic diet, as they work to use ketones for energy in place of glucose.

MCT oil has been linked to improving memory, learning, and brain function, all of which may be symptoms of brain fog. More specifically, it may work to help block certain brain receptors that can cause memory loss, which means that it may help prevent memory loss as a symptom of brain fog in the first place.

Though anyone may benefit from MCT oil, if you are on the keto diet and suffering from brain fog, an MCT oil supplement may be just what you need to relieve your symptoms.

A B vitamin is a water-soluble nutrient you must ingest each day, as B vitamin cannot be stored in the body. Taken together, the 8 B vitamins may provide a whole host of benefits for the body, but there are a couple that may be especially helpful for relieving symptoms of brain fog.

Vitamin B6, or pyridoxine, is another nutrient that can help beat brain fog. It is important for mood regulation as it helps create neurotransmitters such as dopamine and serotonin. Low levels of these neurotransmitters have been linked to those with depression, which can cause brain fog.

Vitamin B12, or cobalamin, may also help those with depression-induced brain fog. Vitamin B12 helps make and metabolize serotonin, so including vitamin B12 in the diet may improve symptoms of depression. It may also have memory-enhancing properties, another symptom of brain fog, as low levels of vitamin B12 have been linked with memory problems.

Other B vitamins (including vitamin B1 or thiamine, vitamin B2 or riboflavin, vitamin B5 or pantothenic acid, vitamin B7 or biotin, and vitamin B9 or folate) may also play varying roles when it comes to the overall health of the brain and improved cognitive function. Therefore, including a supplement with a variety of B vitamins into your daily routine may benefit overall brain health, including relief from brain fog symptoms. 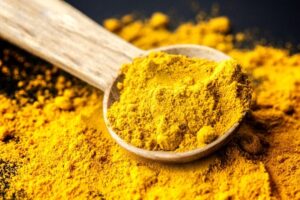 Curcumin may be found in turmeric, a spice in the ginger family. Turmeric is native to Southeast Asia and has been used as a spice and medicinal herb for thousands of years, especially in India.

It is known to be a natural anti-inflammatory and antioxidant. In the brain specifically, it has been linked to brain-derived neurotrophic factor levels or BDNF. BDNF levels tend to be lower in those with mental health issues like depression and neurodegenerative diseases like Alzheimer’s.

Ingesting curcumin may increase the levels of BDNF in the brain, delaying or even reversing the symptoms of depression and Alzheimer’s. It seems to be most involved with improving attention and memory, which are two signs of brain fog. Therefore, a curcumin supplement may be a wise choice for relieving symptoms of brain fog.

L-theanine is an amino acid, though it is not found in our bodies. It can be found in some mushrooms, as well as black and green tea.

This amino acid is probably best-known for its relaxing effects and ability to reduce symptoms of anxiety, insomnia, and stress, all of which may cause brain fog symptoms. Interestingly, when paired with caffeine, it almost has the opposite effect. Combining caffeine and L-theanine may actually increase alertness, focus, and attention, which may also be helpful to those with brain fog.

Since L-theanine is only found in a few food and drink sources, L-theanine supplements are a common choice for those wishing for relief from brain fog and its possible health-related causes.

Ginkgo biloba, also known as maidenhair, is from the ginkgo tree, one of the oldest living trees in the world. Historically it has been found in Japan, China, and Korea, but is now grown in parts of the United States and Europe. It has been used in traditional Chinese medicine for many years but has become an increasingly popular supplement for its potentially beneficial properties in the Western world.

Ginkgo Biloba has been linked with reducing symptoms of anxiety and depression, both of which may cause brain fog symptoms. It is thought that the antioxidant properties of ginkgo Biloba may be responsible for its ability to decrease anxiety, while its anti-inflammatory properties may help those with depression deal with stress. In traditional Chinese medicine, Ginkgo Biloba is also commonly used for migraines, a health condition that may also cause brain fog.

Though it can be found in a tea, most people consume a Ginkgo Biloba supplement if they want to use it to alleviate brain fog. Just don’t consume the raw seeds of the Ginkgo Biloba tree – they are poisonous. 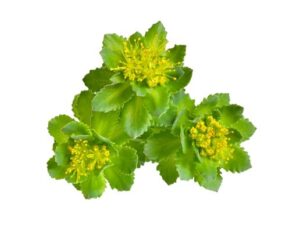 The herb Rhodiola Rosea commonly referred to as a golden root, arctic root, or simply Rhodiola can be found in the cold mountains of Asia and Europe. Scandinavian and Russian countries have been using Rhodiola in treatments for centuries.

Rhodiola has been touted as an adaptogen, meaning that it can help the body deal with fatigue and other psychological stressors. Therefore, it may help alleviate symptoms of stress, anxiety, and/or depression, all of which have been associated with brain fog.

Rhodiola may also help those suffering from learning and memory issues due to brain fog. It may actually increase mental performance relating to these problems, especially when under mental and physical stress.

Rhodiola is another plant that may be available in tea, but it is probably most often consumed in the form of a Rhodiola supplement. Look for a supplement containing 1% salidroside and 3% rosavin, as these are the naturally occurring amounts found in the Rhodiola root.

Bacopa monnieri also referred to as water hyssop, Brahmi, herb of grace, thyme-leaved gratiola, or just bacopa, is a plant traditionally used in Ayurvedic medicine. Bacopa contains a class of active compounds referred to as bacosides, and it is thought that these are largely responsible for bacopa’s beneficial effects on the brain.

Like Rhodiola, bacopa is thought to be an adaptogen, so it can help make the body more resistant to symptoms stemming from stress and anxiety. It has also been linked to significant improvements in learning and memory, both of which may be affected in those with brain fog.

Those who wish to try bacopa to help with brain fog symptoms should look into incorporating a bacopa supplement into their diet, as it is typically not found in any food or drinks.

Brain fog can certainly be frustrating. It may cause memory problems, an inability to concentrate or make decisions, and generally just leave you feeling mentally drained. These symptoms can interrupt your daily life, both personally and career-wise, making you feel like you just can’t function properly or be at your best.

Fortunately, there are many different brain fog supplements out there that may help relieve the irritating and inconvenient symptoms of brain fog and decreased cognitive performance. For example, B vitamins, curcumin, L-theanine, Ginkgo Biloba, Rhodiola, and bacopa may help beat brain fog by directly treating symptoms or addressing what caused the brain fog in the first place.

Though the best supplements to help with brain fog are naturally occurring, if you are thinking about taking them on a regular basis, it is a good idea to discuss them with your doctor first. In addition, these supplements may interact with other medications or even have negative effects on those with pre-existing health conditions, so be sure to do your research.

That being said, if you are otherwise healthy, then what have you got to lose? Not only may these supplements help get rid of brain fog, but they may contribute to the general health of your brain. And who can’t benefit from that?